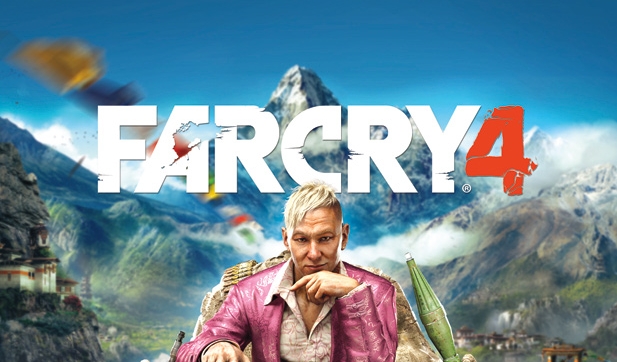 We reported earlier about Far Cry, and when it got it’s release date confirmed. Now E3 is here and you know what that means. Trailers Trailers and Trailers. Ubisoft started its E3 press conference earlier today with a quick look at Far Cry 4’s opening minutes. Ubisoft then released a Gameplay Demo showing off some cool things we could do in the game.

Let’s talk about the Trailer first. In the trailer, the player’s character is on a bus ride into Kyrat, but something unfortunate happens at the Border crossing and things go crazy. The guards open fire on the passengers, and their slaughter is only interrupted by a surprise visit from Pagan Min. The character is a big part of Far Cry 4’s story, as he is the main villein of Far Cry 4. Check out the Main Trailer below.

Now talking about the Gameplay demo, Ubisoft game creators talked a little about what you can do inside the game, the environment and even on how you can play with your friends.

Firstly we see the Himalayan Mountains and the graphics look great. Then we get to expereience the new tools that are included in the game like the grappling hooks that allow us to cross or climb mountains easily. The player can hunt and kill animals like on Far Cry 3, and this time around because there are Elephants, the player can even ride them. Talking about elephants as seen on the gameplay video, elephants are very useful during gameplay as they will sometimes come and attack our enemies. We also get to use Wing-Suits in the game and that’s always going to be a pleasant experience isn’t it? Checkout the Gameplay Demo Video down below.

Ubisoft also left this description about the game,

Hidden in the towering Himalayas lies a country steeped in tradition and violence. You are Ajay Ghale, returning to the country of your birth, the lush forests and harsh snowcapped summits of Kyrat, to fulfill your mother’s dying wish of spreading her ashes. This striking and unpredictable country offers visitors opportunity and peril. You quickly find yourself caught up in a rebellion to overthrow the oppressive regime of Pagan Min, a man known as much for his sense of style and charisma as his cruelty and calculated brutality. Navigating the treacherous landscape, you find your fate increasingly determined by the choices you make because in Kyrat, every second is a story.

In Far Cry 4, you’ll conquer fortress outposts from the back of a six-ton elephant and take to the skies as you rain down explosives from the seat of your gyrocopter. The vertical landscape of the Himalayas isn’t just a pretty backdrop, but a playground that encourages the player to fight, hunt and explore, grappling up cliffs or launching into the air, plummeting to the valley below in a controlled free fall with your wing suit. You’ll carry with you a truly unique arsenal of weaponry that lets you play your way, whether it’s sniping, sneaking or all-out assault. When all else fails, animals can be your biggest allies or your greatest danger, as Kyrat’s wilderness delivers on the promise of a true open world anecdote factory.

For the first time in any Far Cry game, you’ll be able to hunt, fight and explore in the open world with a friend. With co-op Guns for Hire, you can invite a friend into your world to liberate towers, take over outposts and share in the spoils. Hurk, from the Monkey Business add-on content of Far Cry® 3, joins in the fight to take over Kyrat.

The game’s website has also been improved and has been given a face lift. You can check it out here. Are you excited for the game as we are? Drop your thoughts in the comments section down below and let your friends know about this Awesome news by Sharing this.