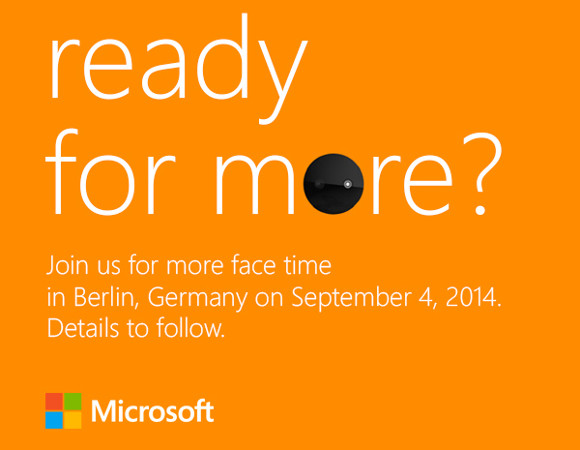 Microsoft sends out Press Invitations for its IFA Event

September is getting close, and more and more people are getting excited for IFA. Microsoft has sent out Press Invitations earlier today for its IFA Event on September 4th.

The “O” in “more” has been replaced by the camera module of the of a device, and we think it is the Lumia 830. We are pretty sure that the Lumia 830 will be unveiled at that event. The Lumia 830 has been rumored to come with a 13 MP PureView rear camera, though everything else about it is more or less a mystery. There is a possibility of seeing the Lumia 730 as well. The Lumia 730 is should sport a 4.7-inch 720p Display, an odd 6.5 MP rear camera, a 5 MP front snapper for selfies, a 1.2 GHz quad-core processor, 1GB of RAM, 8GB of internal storage, as well as a 2000 mAh battery. Both models are due to launch running the latest version of Windows Phone 8.1.

Are you excited? Make sure to mark the date on the Calendar.