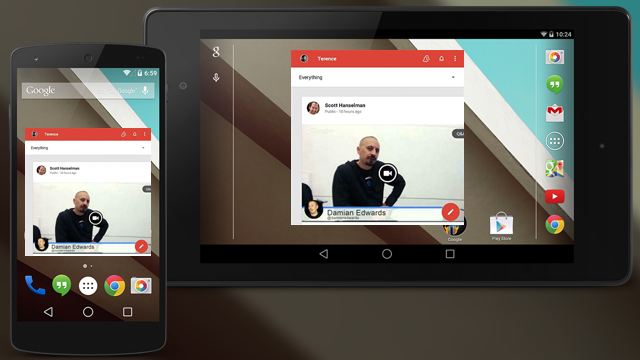 Floating Windows Might Debut with Android L according to Leaked Video

Yesterday we told you about Multi Window mode coming to Android very soon, and now today we get to hear about another Multi Tasking Feature known to be on Samsung devices, making it’s way to Pure Android Officially. I mean it is possible to get this by using an Xposed Module, XHalo Floating Windows but it needs root and not everyone is comfortable having a Rooted Phone. So this just might make those people happy.

Checkout a Demo by Terence Tuhinanshu below first to get a clear idea about what I’m talking about.

It is said that this Floating Window Feature might debut with Android L. With Floating Windows, Apps will be hovering in small windows over the top of the interface, so you can use your Notes while browsing a website, for Example.

According to the Video, the Floating Windows are running on a Nexus 7 tablet and the windowed apps are the default Google+ and Photos ones, suggesting that this feature might be built into Android L, and ultimately make its way on each and every phone running the latest Android version. Alternatively, it might be just a bug, and we are all getting worked up for nothing, we’ll see soon because we have heard that Google and HTC are getting ready to launch the Nexus 9 as early as next week after Apple’s Event.

Are you excited to see Floating Windows Finally making its way to Pure Android? Drop a Comment Down below.