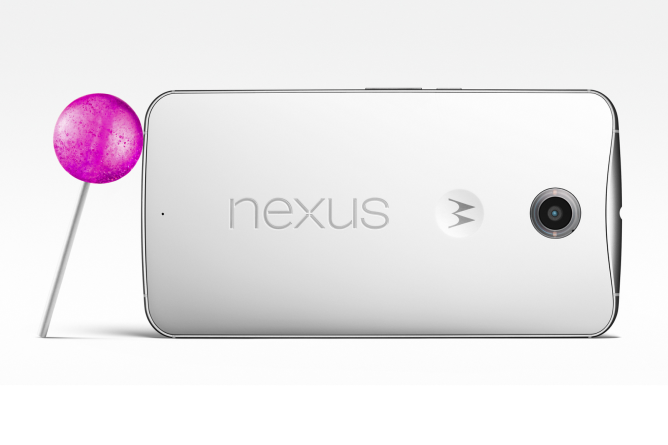 Google has just unveiled the Google Nexus 6 made by Motorola, along with the HTC Made Nexus 9. Both new Nexus devices will be running the latest Android Lollipop. The Nexus 6 looks to be a beastly device, and definitely one of the Best Phones of 2014.

When you see the pictures you realize that the new Nexus 6 is a brownout Moto X (2014); with the added Nexus branding and far improved specs.

The Nexus 6 is the first phablet in the Nexus series. The Nexus 6 has a Giant 5.92″ QHD (1440 x 2560) display with a PPI of 498. Talking about the Button placement, The power and volume buttons have moved down the side of the device so that they’re still accessible. Google also claims that the Nexus 6 will be Water Resistant, which means that it should be able to resist splashes, but is not supposed to get submerged in water. The phone will be available in Midnight Blue and Cloud White.

The Nexus 6 is powered by the Snapdragon 805 SoC. This is the last iteration of Qualcomm’s Krait CPU core architecture, with four cores running at up to 2.65GHz, along with the Adreno 420 GPU. It also has 3GB of Ram.

The Nexus 6 is also the first in the series to ship with 32GB of internal storage for the basic version. This is also a Step in the right direction.

The Camera has been Bumped to 13 Megapixels on the Nexus 6. The Sensor used is the Sony IMX 214, the newest from Sony, and the lens has a wide, f/2.0 aperture. The camera is capable of recording 4K video at 30 frames per second as well as 1080p at 60 frames per second. The device also has OIS (Optical Image Stabilization). The phone also features a 2.1 Megapixel front camera for selfies. It also has the Moto X (2014) like Dual LED Flasher at the back giving it a nice look.

The Nexus 6 features a 3220mAh battery. We expect the device to last a Full Day easily; but we will have to test it out. The Nexus 6 also comes with a Turbo Charger, that you can use to get up to six hours of use with just a 15-minute charge. That alone is promising. The Nexus 6 also features Wireless Charging. Good Stuff Google.

The Nexus 6 will be go up for pre-order on October 29th, and it will be available in stores in the beginning of November . It will be offered Unlocked and off-contract for a full retail price of $649, practically at a flagship grade price. No more Low Priced Nexus.

The Nexus 6 will also be available on AT&T, T-Mobile, Verizon Wireless, US Cellular, and Sprint under contract. Google will also continue to sell the Nexus 5 along with the new Nexus 6.

So are you impressed by the All new Google Nexus 6? You bet I am.