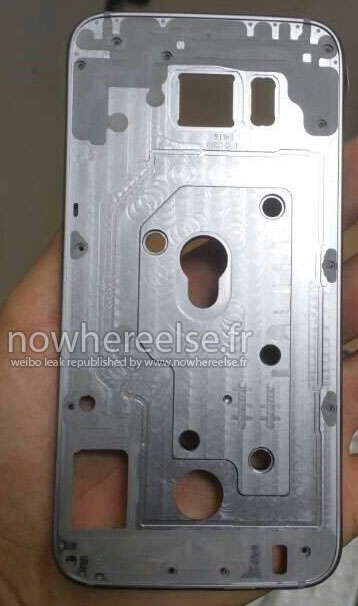 We have seen the Galaxy S6 leak out quite a lot, and today we have got some new images that allegedly show the metal body of the Galaxy S6 from many angles.

According to the latest leak, the device will be just 7.2mm thin, which is almost 1mm thinner than the Galaxy S5. At the top of the body, there are plastic cutouts for the antennas, a secondary microphone and a cutout for an IR blaster. In the left side we see the Volume Rockers and on the right we see the Power/Lock button and a SIM tray. The bottom of the device holds the Micro USB port along with the speaker grill and the 3.5mm headphone jack. That being said, there is a chance that these images could be of some other device Samsung is working on, and not necessarily the Galaxy S6. so take this as a pinch of salt and checkout the leaked images below.

According to the latest Rumors, the Galaxy S6 will feature a 5″ QHD (1440 x 2560) Super AMOLED Display With the Exynos 7420 Octa-Core SoC and 3GB of RAM. Rumors say that Samsung might ditch the Snapdraggon 810 SoC this time around due to overheating. At the back, the flagship will feature a heart rate monitor, and a flasher like the Galaxy S5 but this time on the side of the Camera module. Talking about the Camera, Samsung will be using a 20MP Sensor on the Galaxy S6. We are also expecting to see a 5MP front facing Camera. The Galaxy S6 will be offered in 4 colours first; Dark blue, Blue-green, Gold, and White.

The latest rumors say that the Galaxy S6 won’t be water resistant, but there will be an Active variant of the S6 coming later. We are expecting the Galaxy S6 to pack an improved Fingerprint scanner as well.

We also got to see some renders of the Galaxy S6 with covers, check them out below.

The device will be unveiled at the event by Samsung on the 1st of March 2015. Are you a fan of this design? Let me know, down below in the comments section and Share this with your friends. Stay tuned to Andro Dollar for the Live Stream and the Live Blog of the Galaxy S6 launch event.