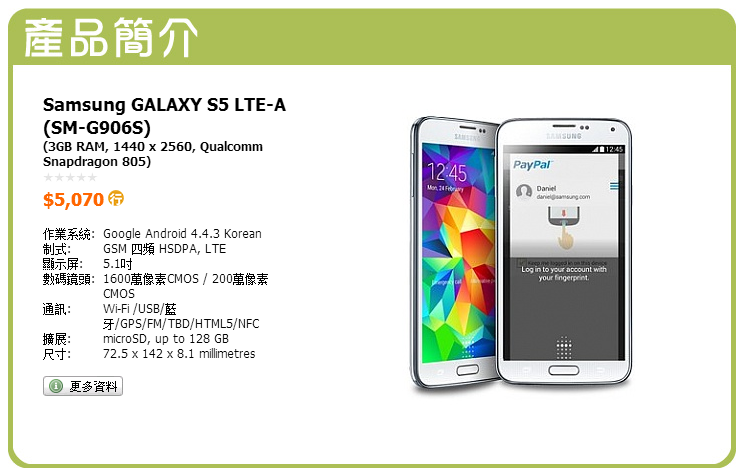 We have been getting reports of the so called Galaxy S5 Prime, even before the launch of the Galaxy S5, and the rumours and leaks continue to grow as earlier today a device with the model number SM-G906S appeared in a pricing database in Hong Kong showing off it’s specifications. The Samsung SM-G906S, which is expected to be one of the variants of the upcoming Galaxy S5 Prime, leaked earlier in Samsung document without any details, and also in GFXBench benchmark.

According to this leak, this version of the S5 will pack a Snapdragon 805 processor, 3GB of RAM, a QHD display (2560×1440), and a 16-megapixel camera. The phone is said to be running the yet unannounced Android 4.4.3, which we’ve heard is also coming to the Galaxy S5 and other devices once it’s officially launched by Google.

No official confirmation has ever cropped up about the device, and if you recall the Samsung CEO denied the existence of the Galaxy S5 Prime. It is sure now that we will see a more powerful version of the Galaxy S5 in the SM-G906 series.

This report also brings out other doubts to our minds when it says LTE-A at the end of it’s name. That is whether this device will be an exclusive in Korea, at-least initially because most other countries don’t use that technology yet.

We should see Samsung make the device official because we are seeing so many leaks. What do you think? Exicted yet? Let us know.